Hi,
We are converting an existing application towards Delphi 11.2 and TMS VCL UI Pack 10.8.5.0

When we open forms with TAdvStringGrid components in the RAD Studio IDE, we notice that some color properties are automatically changed.
But when we revert the changes, build the application and run, the colors are as expected.

Is this an expected behaviour?

We used the following steps to test this behaviour:

Are you using a VCL style or a TAdvFormStyler or the UIStyle property different from tsCustom?

When using a VCL style, set grid.StyleElements = []
When using a TAdvFormStyler, exclude the grid from being styled.
Set grid.UIStyle = tsCustom

Thank you for the quick reply!

Sadly, none of those suggestions apply to our situation.
We are not using a VCL Style, no TAdvFormStyler and on all the grids the UIStyle is set to tsCustom.

We believe that this is causing the problem, because with the parameter init being True, the inline-procedure InitColors is called in designtime. Which changes the color properties, after they are loaded from the DFM.

I cannot reproduce this, so please isolate this and provide a sample source project with which we can reproduce the problem here so we can investigate.

Sorry for the belated response with an example project.
It seems that the colors are changed, but no change is detected by RAD Studio.

We noticed that the colors were changed, when we opened one of the forms, changed something and saved the changes. After we opened our git tool, the git difference shows a change of properties we did not change by ourself.

In this example focus on the GridColorLine property. It should be clRed in the belowest grid of TForm1 and in the grid of TForm2, but when you open the forms in RAD Studio it is changed in clSilver.

If you still cannot reproduce, we could make some screenshots showing this.

Do you use the latest version of the components, as I retested this here with your project and both at design-time & run-time I see the red grid line color in the bottom grid: 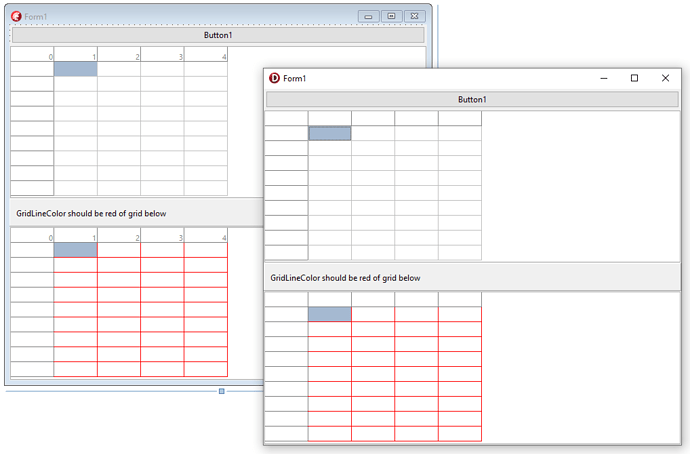