Hi
I'm just discovered an issue about case regarding template name
After deploying on a linux apache I get a 404 error about attempt to load html "view.demande.New.html" 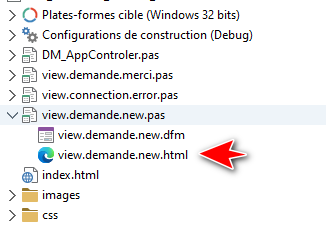 And the built project contains the right file 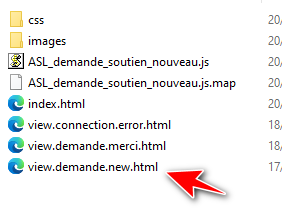 May be this can occurs if initially (I don't remember) I create the file with "New" and then rename with "new".
But this issue prevent deployment to work (none such error on Windows which isn't case sensitive for filename).
Is there a way to check where the filename used in js will be defined?

Here it's a quite simple app but I have to deploy on linux apps with 30+ pages and I would like to avoid such issue.

Note : by rename on server the file with "New", template works fine... but it isn't an acceptable workaround.

Thanks for help
Sylvain

The filename is retrieved from the unit name. Check in your Pascal source code for the unit what unit name is specified there.

A full delete of Win32, TMSWeb and rebuilt doesn't fix the issue.

Can you send the project with which we can reproduce this?

I can
Is there a private way to process please ?
I would like to avoid to use forum for that

Click the name of one of our support team members, then click "Message" in the popup that appears. That will send a private message.

It looks like a bug in the pas2js compiler. We will report this to the pas2js team.
As far as we see, this bug is related to using ".new" in the filename. I tested various other combinations like unitx.nw.pas or unitx.test.pas etc... and this casing issue did not happen. I suggest to choose a name different from new for now till the pas2js team fixed this.