I have an odd one here... working on some old code here.

JvMail.pas from JEDI has this call it makes internally

This was causing an exception error. 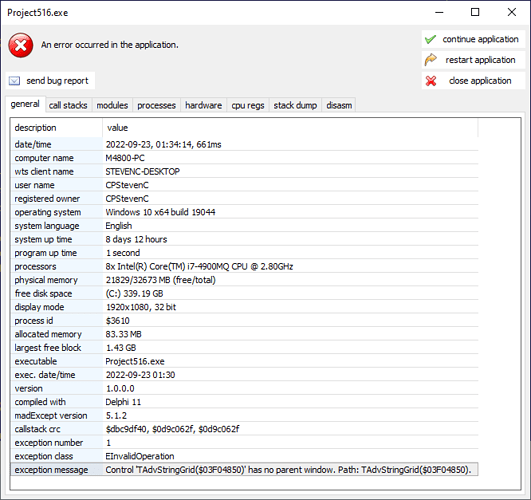 This took me forever to figure out why in MY code.

Finally I found it.

I found some ooooooold code from almost 10 years ago.

Was some dumb code where it used the grid to handle some things quickly without visually showing anything to the user. Ala, hack job.. but it has worked for 10 years now with no issues.

Now that we switched to D11 and using UI Pack vs the old "Component Pack" in 10.2 that we have been on for A long time, this appears to not be good.

My fix for now, create it, set to visible = false, and parent it to the form.

Now, my issue is. Is this a TMS issue, Jedi, Or Delphi? (Beyond my ugly code)

The exception happens on the

Apparently making A TAdvStringgrid with no parent, now registers under Screen.Forms

Not sure this should work like that? TStringGrid does not reproduce this error.

Can reproduce with this code below.

But I feel something else going on here.

I know my usage of the non parented grid probably isn't wise but I figure i'd point it out, as it had worked for basically a decade.

It is a strange coding practice and nevertheless strange that by disabling the window, the grid wants to create a window instance.
We've added a check against this to prevent this error from happening that will be included in the next update.

It is strange coding... It was something I cobbled together for a proof of concept deal, which ended up being production software suddenly.... and hasn't changed.

Thanks for looking into it so quickly!