Browser fails to Launch if the project(.dpr) is saved in a folder

Using the simplest of WebCore Applications and running it from within Delphi (Berlin) fails to launch the browser.
If the project(.dpr) is saved directly in the ".../Documents/Embarcadero/Projects" folder, the browser launches.
If the project(.dpr) is saved in a subdirectory. eg ".../Documents/Embarcadero/Projects/Trash" folder, it compiles with no error but does not launch the browser.
If I type the url directly into the browser it displays correctly.
http://localhost:8000/TrashProj/TrashTest.html

What am I missing?

The same behaviour occurred with the trial version and I had hoped it would go away with the licensed version.

The options are set as you have suggested.

The only thing I had fiddled in options after install was the Library Path as it was blank and I was following suggestions from Wagner's course video.

Up to now I have turned a blind eye, but it is stopping me in my tracks as I am attempting to use the TMS XData Web App Generator. If I launch via delphi having resaved the dpr directly under projects, it fails to find the linked css files.

What browser is selected in the IDE? 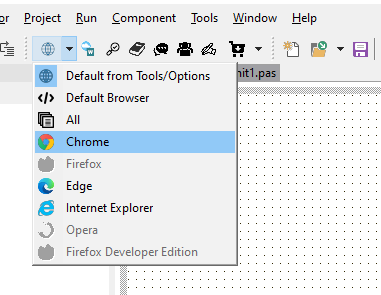 Do you see in the Windows taskbar the TMS Debug Web Server running?

Try to right-click and open it and see the URL & root dir there.

Chrome is the default Browser.

Typing the Url into the Browser directly shows correctly

Please look into the Win32\Debug folder under your project folder. In your case it should be

The directory contains the correct 2 files.
The exe does NOT launch the browser.
The contents of the ini are copied below.

How does your registry under

look like? On my PC the default value is

And I have another question: What happens if your try another browser?

Remember : The Browser successfully launches from the Projects folder and from other folders in c: directory. Just not from the subfolder of Projects

The registry key is correct.

What happens if you save a project somewhere else, e.g. under c:\temp? And could you please try the Edge or the IE?

I can only suspect there is something with folder permissions set in your Windows operating system that is too strict.
I suggest to use folders for which no special permission settings apply.